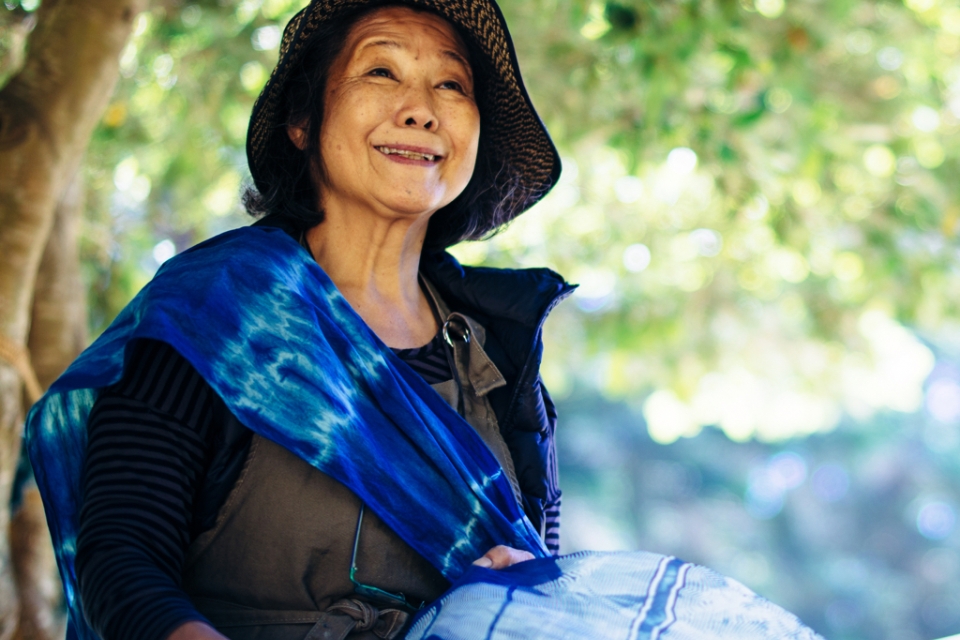 WASHINGTON (Nov. 4, 2016)—The Board of Trustees of the George Washington University Museum and The Textile Museum presented Yoshiko Iwamoto Wada with the George Hewitt Myers Award for lifetime achievement and exceptional contributions to the field of textile arts. The award, named for The Textile Museum’s founder, is recognized internationally as the field’s highest accolade. Ms. Wada received the award last night at a dinner held at the Fairmont in Washington, D.C. Honorary co-chairs of the host committee were noted designers Jack Lenor Larsen and Issey Miyake.

With nearly forty years of experience, Ms. Wada is celebrated globally as an artist, curator, historian, film producer, and educator in the textile world. Among her achievements, she is recognized for single-handedly introducing the Japanese art of shibori to the United States. She is president of the World Shibori Network, founder of Slow Fiber Studios, producer of the Natural Dye Workshop film series, and co-chair of the 10th International Shibori Symposium in Oaxaca, Mexico.

She has been curator of exhibitions at the Museum of Craft and Folk Art in San Francisco, the Jim Thompson Art Center in Bangkok, and co-curator of The Textile Museum’s 1996 exhibition The Kimono Inspiration: Art and Art-To-Wear in America. Her films have focused on natural dyes and shibori. Furthermore, she is the author or editor of five publications on Japanese art and the shibori technique, as well as numerous papers, journals, and catalogues. An accomplished artist, she has taught workshops on dyeing, shibori, and fabric recycling. She has also led educational trips across the globe for organizations including LongHouse Reserve, The Textile Museum, and Textile Society of America.

“Yoshiko has a distinguished following on four continents as an artist and educator,” said Bruce P. Baganz, co-chair of the George Washington University Museum Board of Trustees and president of The Textile Museum Board of Trustees. “She has achieved global impact in shibori, dye patterning, and contemporary textiles, and she is recognized as one of the world’s most influential leaders in the textile arts.”

Ms. Wada holds a B.F.A. in textile art from Kyoto City Fine Arts University in Kyoto, Japan, and an M.F.A. in painting from the University of Colorado in Boulder, Colorado. She received the Japan Foundation Fellowship in 1979 and 1996 that led to her publication of the definitive books Shibori: The Inventive Art of Japanese Shaped Resist Dyeing and Memory on Cloth: Shibori Nowx. In 1973, she co-authored Ikat: An Introduction, the first technical instruction book in English on kasuri, or Japanese ikat weaving.

During the dinner, the museum also presented The Textile Museum Award of Distinction to Rebecca A. T. Stevens. The award recognizes exceptional contributions that have significantly advanced the museum in the fulfillment of its mission. As the consulting curator for contemporary textiles at The Textile Museum for over three decades, Ms. Stevens has been instrumental in establishing the museum’s contemporary textile arts presence. Among the multiple exhibitions and accompanying catalogues that Ms. Stevens has organized for The Textile Museum are The Kimono Inspiration: Art and Art-To-Wear in America co-curated with this year’s George Hewitt Myers Award honoree Yoshiko Iwamoto Wada, Green: the Color and the Cause, Technology as Catalyst: Textile Artists on the Cutting Edge, and most recently Stories of Migration: Contemporary Artists Interpret Diaspora.

“Rebecca has been one of the driving forces behind The Textile Museum’s contemporary art programming,” said John Wetenhall, director of the George Washington University Museum and The Textile Museum. “As the museum prepares to expand its contemporary art initiative, we recognize Rebecca for the foundation she has laid in establishing the museum as an important voice in this area.”