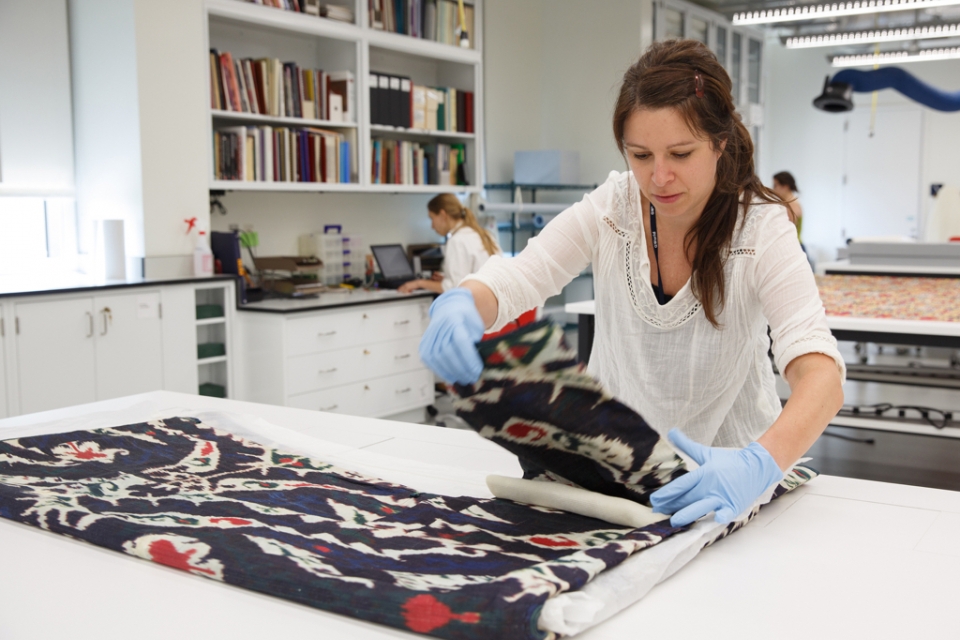 December 12, 2016
MEDIA CONTACTS:
Kurie Fitzgerald: [email protected], 202-994-6461
Brett Zongker: [email protected], 202-994-6466
WASHINGTON (Dec. 12, 2016)—The George Washington University Museum and The Textile Museum announces the appointment of Maria Fusco as chief conservator and the Margaret Wing Dodge chair in conservation, effective today. In this capacity, she will oversee the care and maintenance of The Textile Museum’s 20,000-piece collections.
Ms. Fusco joined The Textile Museum in 2011 and played a major role in its transition to new facilities at the George Washington University in 2014. She most recently served as its interim chief of conservation. Before joining the museum staff, Ms. Fusco trained at the Textile Conservation Centre in Winchester, England, and held roles in government and private institutions in the United States and Europe, including the Museum at the Fashion Institute of Technology, the Los Angeles County Museum of Art and the Smithsonian’s National Museum of African Art. She was named chief conservator at the George Washington University Museum and The Textile Museum following an extensive national search.
“I am honored to continue serving the collections, my fellow staff and the textile community as chief conservator,” said Ms. Fusco. “Our museum's recent move to GW, together with generous support from the Avenir Foundation, allows us to expand on our strong traditions in education, research and exhibition and collections care. I am grateful to be here for this opportunity.”
The museum also announces the appointment of Elizabeth Shaeffer as associate conservator. Ms. Shaeffer comes to the museum from the Los Angeles County Museum of Art, where she had been an Andrew W. Mellon fellow in textile conservation since 2014. She holds a master’s degree in art conservation from the Winterthur/University of Delaware Program in Art Conservation.
These two appointments cap significant advances in the museum’s esteemed conservation program—including the construction of the Avenir Foundation Conservation and Collections Resource Center at GW’s Virginia Science and Technology Campus, which opened in spring 2014, and a $5 million gift from the Avenir Foundation, announced last May, that will provide equipment and technology for the care and study of the collections. This gift also increased the endowment for the museum’s Margaret Wing Dodge Chair of Conservation, established by the foundation in 1997, and created a new endowment to fund conservation staff, training and operational costs for the lab. This support enabled the museum to host Gennifer Majors, who graduated from University of Glasgow with a MPhil in textile conservation in 2015, as its first postgraduate conservation fellow last year.
“Maria Fusco has demonstrated the highest standards of professionalism and care acting as our museum’s interim chief of conservation,” said John Wetenhall, director of the George Washington University Museum and The Textile Museum. “I admire her skill as a textile conservator, as well as her vision for a lab that is not only responsive to the needs of our own collections and exhibitions, but also engaged in research, teaching and training.”
Visit the museum’s website for the latest information and details on exhibitions and educational programs. www.museum.gwu.edu.
-GW-