'Bingata! Only in Okinawa' Tracks the Colorful History of the Ryukyu Kingdom 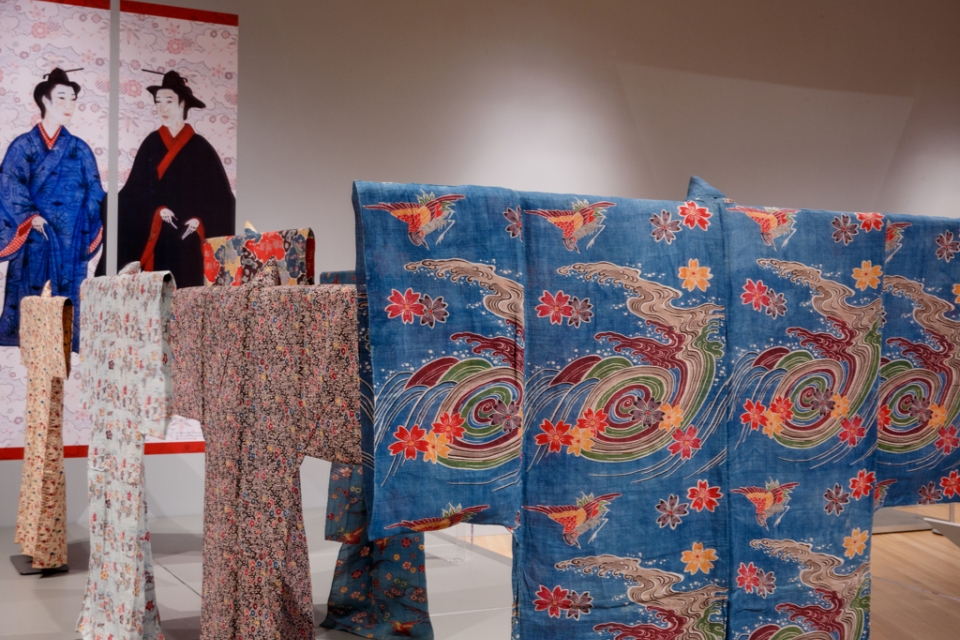 November 04, 2016
MEDIA CONTACTS:
Kurie Fitzgerald: [email protected], 202-994-6461
Brett Zongker, [email protected], 202-994-6466
WASHINGTON (Nov. 4, 2016)—The first major American exhibition of Okinawa’s textile treasures – brightly colored fabrics known as bingata – opens Saturday at the George Washington University Museum and The Textile Museum. Organized in partnership with the Okinawan Prefectural Government, “Bingata! Only in Okinawa” introduces U.S. audiences to the history and culture of Japan’s southernmost administrative district through dozens of bingata textiles, ranging from 18th- and 19th-century court robes to contemporary works by Okinawan artists and fashion designers.
“It is important that we use our museum to introduce American audiences to unfamiliar cultures and topics like Okinawa and bingata,” said Lee Talbot, curator of Eastern Hemisphere Textiles. “Despite near-destruction in World War II, Okinawan culture and its people have endured and thrived. Although little-known in the West, this area holds a pivotal place in history and produces some of the world’s finest fabrics.”
The Ryukyu Kingdom and Bingata’s Royal Beginnings
From the 15th century until 1879, Okinawa was the independent Ryukyu Kingdom, with its own language, culture, religion and distinctive textile art. Among its most famed fabrics were those patterned with bingata, a uniquely Okinawan dyeing technique developed for the royal court and noted for brilliant colors and bold designs that evoke the lush island landscape. Bingata is a type of resist dyeing that uses rice paste applied to a textile—freehand or through stencils—to prevent dyes from coloring certain areas.
The arts and culture of the Ryukyu Kingdom reflect its position as a dynamic trading center linking Southeast Asia, China, Japan and Korea. This international exchange of goods and ideas enriched Ryukyu financially, intellectually and artistically. Exposure to foreign fabrics passing through the kingdom’s main port encouraged great diversity in Ryukyu’s textile arts. The art of bingata dyeing developed in this cosmopolitan cultural atmosphere.
Exhibition Highlights
“Bingata! Only in Okinawa” brings together a stunning array of garments, furnishings and related objects from three distinguished Okinawan institutions: Naha City Museum of History, Okinawa Churashima Foundation and Okinawa Prefectural Museum and Art Museum. Over three months, the exhibit will showcase more than 100 textiles (due to their fragility, only about 50 will be shown at any given time). The juxtaposition of traditional pieces with contemporary works demonstrates the enduring legacy of bingata as a symbol of Okinawan identity, history and culture.
Highlights include:
• Watansu (winter garment worn by royal family), Shuri, Okinawa, 19th century. The royal court in Shuri, Okinawa, adopted the Chinese custom of regulating the colors and types of fabric worn by the various court ranks. In the Ryukyu Kingdom, as in China, yellow clothing was restricted to the ruling family. Okinawan textile artists created brilliant yellows using orpiment—a rare arsenic sulfide.
• Child’s garment, Shuri, Okinawa, 19th century. In the Ryukyu Kingdom, some textiles were believed to carry special powers. Patterned with auspicious motifs, this garment includes a tassel (mabuyao) on the collar to protect its young wearer from evil. According to traditional Okinawan beliefs, a sacred spirit or soul called a “mabui” inhabits the body; its accidental escape can result in illness, death or misfortune. This example is one of very few garments with intact mabuyao that have survived to the present day.
• Yuken Teruya, “You-I, You-I,” Okinawa, 2002. At first glance this garment appears to be a classical Ryukyuan dance costume, but closer inspection reveals its potent commentary on hardships that Okinawa faces today. Alongside traditional motifs, this robe depicts American paratroopers, fighter jets and aircraft. American military bases cover more than 20 percent of the total land area on Okinawa Island, giving rise to many tensions.
The exhibition is open through Jan. 30, 2017. It is organized in partnership with the Okinawa Prefectural Government, with major grant support from the Coby Foundation, Ltd., and the E. Rhodes and Leona B. Carpenter Foundation.
Current Exhibitions
"A Collector’s Vision: Creating the Albert H. Small Washingtoniana Collection" presents highlights from the Albert H. Small Washingtoniana Collection, including his first acquisition and other items that explore what motivates an individual to collect. Mr. Small, a third-generation Washingtonian, first became interested in historical collecting after serving in the Navy during World War II. In 2011, Mr. Small donated his unrivaled Washingtoniana collection—nearly 60 years in the making—to GW. This collection documents the formation, development and history of Washington from the 18th to the mid-20th century and includes 1,000 maps and prints, rare letters, photographs and drawings.
In the midst of an election year, the exhibition “Your Next President . . . ! The Campaign Art of Mark and Rosalind Shenkman” looks back at the history of American presidential campaigning through rare 19th-century campaign flags and other patriotic textiles from the Mark and Rosalind Shenkman Collection. Additional pieces from the Albert H. Small Washingtoniana Collection broaden the story. The exhibition is open through April 10, 2017.
Visit the museum’s website for the latest information on exhibitions and educational programs: www.museum.gwu.edu.
-GW-