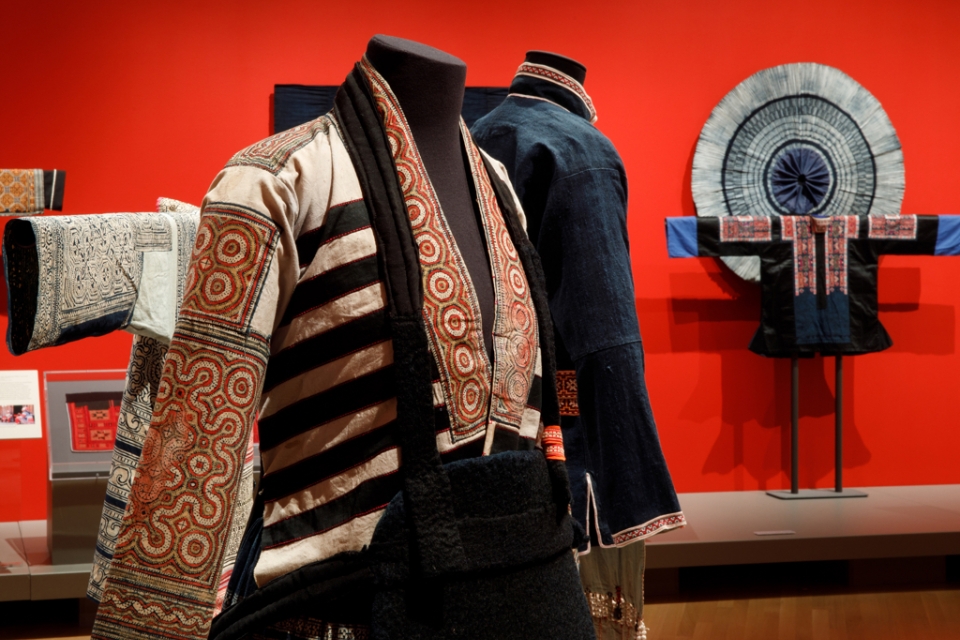 February 22, 2018
MEDIA CONTACTS:
Amelia Thompson: [email protected], 202-994-6461
Maralee Csellar: [email protected], 202-994-6460
WASHINGTON (Feb. 22, 2018)-The George Washington University Museum and The Textile Museum will highlight the diverse cultures of minority peoples in China's Guizhou province with the new exhibition "Vanishing Traditions: Textiles and Treasures from Southwest China." The festival costumes and jewelry on display were made by Miao, Dong, Shui, and other minority peoples in the 20th century. The exhibition opens Saturday, Feb. 24, and will be on view through July 9.
"China is a multi-ethnic society with numerous unique and fascinating cultures, even within a particular ethnic group," said curator Lee Talbot. "In Southwest China, festival costumes are primary expressions of group identity and were traditionally their owners' most valuable possessions, taking many years to make by hand."
The festival costumes featured in the exhibition demonstrate the unique style and culture of each ethnic group. Many groups historically had no written language, so they passed down their history, legends and beliefs through textile and jewelry design. With the rise of machine production and the modernization of many communities, these traditions are disappearing.
Support for this exhibition is generously provided by the E. Rhodes and Leona B. Carpenter Foundation, Roger and Claire Pratt, and Bea and Thomas Roberts. Related programming is supported by Eleanor Coppola and the GW Confucius Institute.
A Gift of Chinese Minority Textiles
During the 1990s and early 2000s, Bea Roberts, a jewelry and fiber artist from Del Mar, California, made several trips to China. She became fascinated by the unique cultures and textile traditions she encountered and began collecting festival costumes. In 2015, Ms. Roberts gifted her 284-piece collection to the George Washington University and The Textile Museum, noting the museum's ability to educate the public about the history of Chinese minority peoples through art.
The Bea Roberts collection highlights the sophisticated handcraftsmanship skills of minority peoples. A single costume can include as many as 15 components, such as a jacket, skirt, apron, baby carrier, belt and various pieces of jewelry. Examples of each of these pieces will be on display.
New and Upcoming Exhibitions
The recently opened Textiles 101 is an ongoing interactive exhibition that allows visitors to explore the basic textile elements of fiber, structure, and color, and the creative choices that influence textile design.
'Binding the Clouds: The Art of Central Asian Ikat' opens Mar. 10 and presents the museum's ikat collection assembled by Guido Goldman. This exhibition will focus on textiles produced with the sophisticated dyeing technique known as "binding the clouds." This exhibition will run through July 9.
Visit the museum's website for the latest information on exhibitions and educational programs: www.museum.gwu.edu.
-GW-