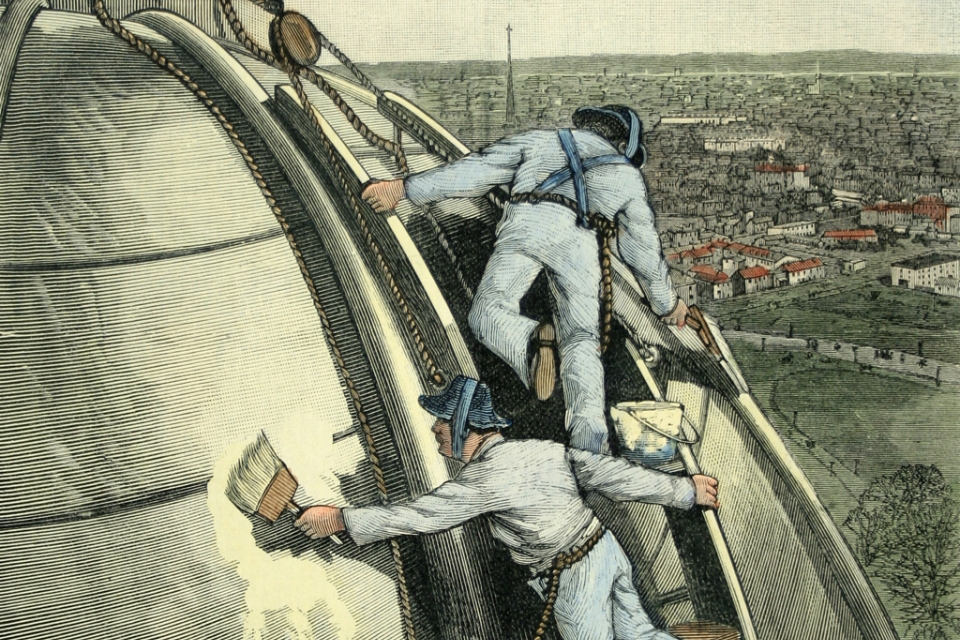 WASHINGTON (May 4, 2017)—When Congress decided in 1790 to create a new seat of government along the Potomac River, President George Washington was charged with deciding what architectural style would be suitable for a new capital city and halls of government. The new exhibition, “Foundations for a Nation: Architectural Images from the Albert H. Small Washingtoniana Collection,” explores the story of the design and early development of the Capitol and White House that set the standard for Washington, D.C.

The exhibition, which opens Saturday at the George Washington University Museum and The Textile Museum, draws from architectural images and rarely seen paintings in the Albert H. Small Washingtoniana Collection. The exhibition includes 32 prints, maps and paintings that illustrate the political inspiration and architectural styles that defined the new capital city.

“So accustomed are we to seeing the White House and United States Capitol that we rarely consider how they came into existence,” said John Wetenhall, director of the George Washington University Museum and The Textile Museum. “This exhibition brings visitors back in history to reveal how these icons of our nation’s capital were built and how they came to embody the values they represent.”

President Washington believed a new nation needed a strong national government. He did not want a simple government town. As historian William Seale writes, Washington wanted to create “a capital the world would respect and understand.” Still, the president wanted to avoid extravagance after America’s recent history as subjects of the British monarchy.

The exhibition retraces the origins of the designs for what would become the Capitol and White House. President Washington hired architect Peter (a.k.a. Pierre) L’Enfant to design the city and public buildings. Mr. L’Enfant’s plan included outlines for the “President’s House” and “Congress House.” However, Mr. L’Enfant quit the project before he could produce actual drawings.

At President Washington’s direction, Secretary of State Thomas Jefferson then called for a public competition to design the buildings for the executive and legislative branches of government. Newspaper ads invited the public to submit designs. Eventually, 14 known competitors proposed designs for the Capitol. The winning entry by William Thornton featured a dome inspired by the Roman Pantheon.

“Thornton’s winning entry came at the last minute,” said Jane Freundel Levey, co-curator of the exhibition. “Because he had access to George Washington, he knew what the president wanted.”

The exhibition also considers who built the capital’s iconic landmarks. Enslaved and free black laborers worked alongside European immigrants to clear the land, cut stones, lay foundations and walls, and cast statues. Ironically, the statue that would eventually top the Capitol dome was called the “Statue of Freedom,” and the man who helped cast it was an enslaved foundry worker named Philip Reid.

Paintings, engravings and maps in the exhibition recall the original and evolving designs, a capital city under construction and several versions of the Capitol dome—surrounded by farmland overlooking what would become the National Mall. One artist who captured early scenes featured in the exhibition, William MacLeod, was a landscape painter of the Hudson River School and became the first curator of the Corcoran Gallery of Art.

While inspired by classical Greek and Roman architecture, the designs for the capital city included distinctly American flourishes. When Benjamin Henry Latrobe worked to rebuild the Capitol interiors in 1815, he added classical columns topped with capitals designed with Native American corncobs and tobacco leaves.

“Foundations for a Nation” is open through Sept. 24.

Current Exhibitions
“A Collector’s Vision: Selections from the Albert H. Small Washingtoniana Collection” presents highlights and new acquisitions from the Albert H. Small Washingtoniana Collection. Mr. Small, a third-generation Washingtonian, first became interested in historical collecting after serving in the Navy during World War II. In 2011, Mr. Small donated his unrivaled Washingtoniana collection—nearly 60 years in the making—to GW. The collection documents the formation, development and history of Washington from the 18th to the mid-20th century and includes more than 1,000 maps and prints, rare letters, photographs and drawings.

The exhibition “Inspiring Beauty: 50 Years of Ebony Fashion Fair” looks at the history of the first major fashion show to break the color barrier to bring black models to the runway and global fashion to African-American audiences.