Fresh Perspective on Indian Textiles Revealed in 100 Masterworks from The George Washington University Museum and The Textile Museum and London-Based Private Collection of Karun Thakar, On View through June 4 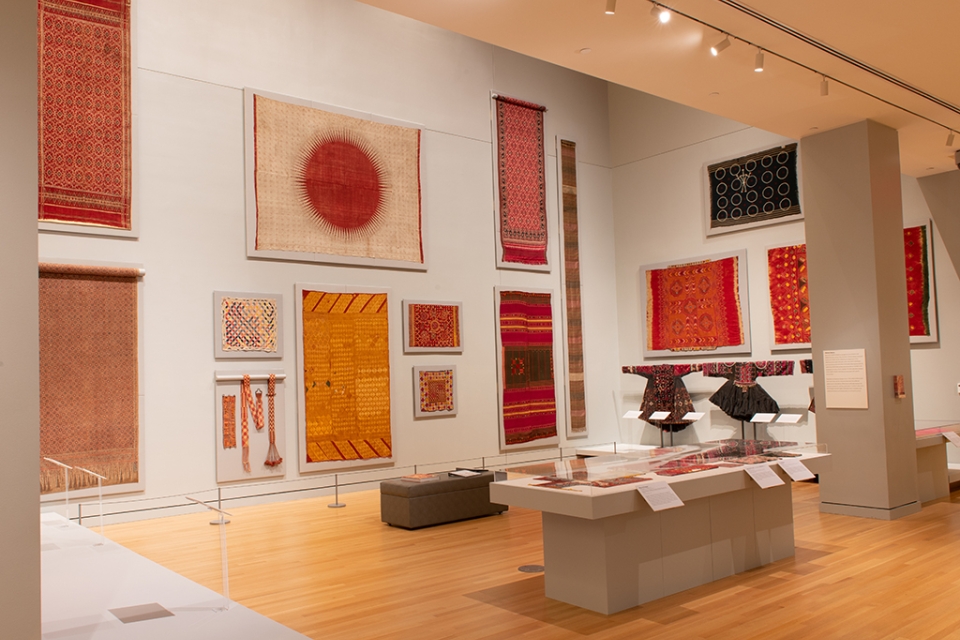 WASHINGTON (March 28, 2022)—The beauty, variety and cultural significance of an astonishing array of traditional Indian fabrics ranging from folk embroideries and Mughal courtly weavings to block-printed, appliqué and hand-painted cloths and knotted-pile carpets, are celebrated in a major new exhibition, Indian Textiles: 1,000 Years of Art and Design. Dating from the eighth to the early 20th centuries, some 100 pieces patterned with India’s most enduring and distinctive designs are on view through June 4, 2022, solely at The George Washington University Museum and The Textile Museum in Washington, D.C.

The exhibition and related events are organized in cooperation with the Embassy of India in celebration of India’s 75th anniversary of independence.

Indian Textiles unites masterworks from two internationally renowned collections, including garments made for elite clientele from The Textile Museum Collection and domestic fabrics created by women from the London-based private collection of Karun Thakar. Dramatically installed across two floors, the exhibition offers visitors a fresh perspective on Indian textiles by highlighting the technical and aesthetic virtuosity of their creators, including block print, ikat, and embroidery, as well as the social, cultural, economic and political contexts that informed their design choices.

"Since reopening in its new home on the campus of the George Washington University in 2015, The Textile Museum was joined four years later by the Cotsen Textile Traces Study Collection, making it a premier world center for the study of Indian textiles," said John Wetenhall, director, The George Washington University Museum and The Textile Museum. "The Karun Thakar Collection complements that of the museum and provided an ideal partner for this exhibition and the catalog that accompanies it."

"This exhibition illustrates how generations of cultivators, weavers, dyers, printers and embroiderers have ingeniously harnessed the region's natural resources to create a remarkable range of fine fabrics, while Indian artisans excelled in adapting designs for changing consumer tastes and markets," said Lee Talbot, curator, The George Washington University Museum and The Textile Museum. "India dominated the global textile trade for centuries, exporting top-quality, affordable fabrics to England, Indonesia, Japan and other markets across Europe and Asia."

Indian textile artists have developed a globally influential and enduring design vocabulary. Spanning time, region, technique and levels of patronage, the fabrics in the exhibition are arranged in three thematic sections that correspond to the predominate ornamental elements traditionally used by Indian textile makers:

Indian Textiles is accompanied by a 400-page, illustrated catalog with 350 full-color photographs. The hardcopy book includes essays by leading historians of Indian textiles, including Rosemary Crill, Steven Cohen, Avalon Fotheringham and Sylvia Houghteling. The catalog focuses on textile ornament rather than date, region, usage, or technique, providing new perspective and scholarship on this ancient artistic tradition. The limited-edition volume, Indian Textiles: 1,000 Years of Art and Design, is available for purchase ($80). Copies may be ordered through the museum's Artisans Gallery at 202-960-5311 or [email protected].

A series of virtual and in-person programs, some organized in collaboration with the Embassy of India, explore themes from the exhibition. Browse upcoming programs.

For the most up-to-date information on the GW museum's visiting hours, exhibitions and educational programs please check the museum website.