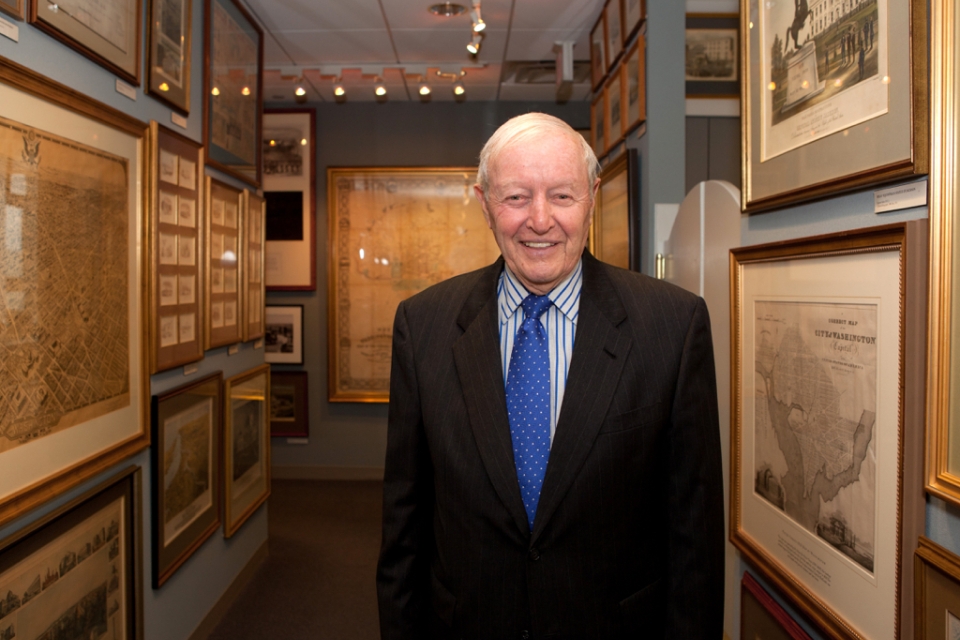 Albert H. Small, a 2009 recipient of the Presidential Humanities Medal, is donating his unparalleled collection on the history of Washington, D.C., to GW.

Mr. Small’s Washingtoniana collection will be permanently displayed in the 156-year-old Woodhull House and a to-be-constructed adjacent museum on campus. The museum will include galleries and space for academic and scholarly activity. A $5 million gift from Mr. Small will support the renovation of the Woodhull House and construction of the new museum.

“Albert Small, a native Washingtonian, has methodically assembled the single most significant and extensive collection in private hands relating to the history and development of Washington and the District of Columbia,” says Chris Coover, senior specialist, books and manuscripts, at Christie’s in New York.

“Small’s remarkable collection – some 50 years in the making and impossible to duplicate today – is a treasure trove of rare maps, drawings, letters and documents, lithographs, books and ephemera, and is a testament to his passionate enthusiasm as a collector,” says Mr. Coover.

GW President Steven Knapp says the collection will provide “unparalleled opportunities not only for our current students and scholars but also for future generations to study the history of our nation through the study of this nation’s capital.”

The center will integrate the collection into a wide range of academic studies, including American and Washington, D.C., history; George Washington and his impact on our country; geography; museum studies and programs; and public lectures. The collection will also be digitized for the Internet.

“What most influenced my thinking was the idea of making my collection the centerpiece of a broad range of studies and symposia at the university, which will allow future generations to understand and appreciate an important part of America’s history,” says Mr. Small.

The donation to GW builds on Mr. Small’s long history of preserving and sharing America’s heritage. In 2005, he donated the earliest known image of the White House – a watercolor done in 1801 by J. Benford – to the White House, where it now hangs. The University of Virginia was the recipient in 2004 of Small’s collection on the Declaration of Independence, where it is housed in the Albert and Shirley Small Special Collections Library.

“The university is deeply honored to be the recipient and guardian of such a historic collection,” says Robert Perry, chairman and president of the National Trust for the Humanities and a GW trustee.