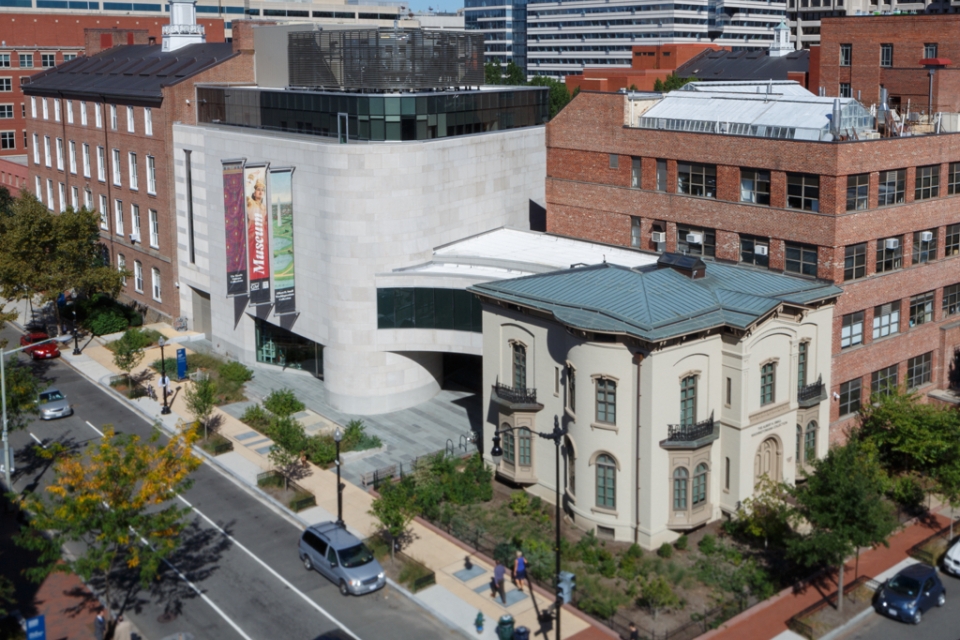 WASHINGTON (March 21, 2016)—One year after the George Washington University Museum and The Textile Museum opened with a new museum model in a combined facility, programming has quadrupled and attendance has surged. The innovative university museum has grown new academic collaborations to make GW a nucleus for research in art, the history of the District of Columbia and museum studies. Also in its first year, the museum launched an initiative to collect contemporary textiles for the first time.

“In the last year, we have created a thriving hub for arts and culture at the George Washington University,” said John Wetenhall, director of the George Washington University Museum and The Textile Museum. “This new building offers a state-of-the-art showcase for one of the world’s premiere collections of textiles, as well as a vibrant center for the study of our nation’s capital through the Albert H. Small Washingtoniana Collection. We have engaged students and faculty from the GW Corcoran School of the Arts and Design and from across the university’s academic disciplines. Public programming has expanded dramatically, exciting exhibitions are on schedule and we will be pursuing a new focus on contemporary textiles.”

Reflections on the Museum’s One-Year Anniversary: An Overview
The opening of the museum culminated years of preparation. It celebrated two new buildings: a conservation and collections resource center in Ashburn, Virginia, and a new museum building in D.C. Nearly 20,000 works of global textile art were inventoried, packed and moved from The Textile Museum on S Street to the new collections center, while the new building was installed with major exhibitions in galleries more than twice as large as those of the old facility. Its financial assets were transferred and former building sold, contributing to an endowment to provide financial support for The Textile Museum under the umbrella of GW. The new museum also embraced an entirely new subject area generated by Albert H. Small’s gift of his collection of Washingtoniana, thus adding D.C. history and National Capital Area Studies to the museum’s repertoire.

During its first year of operations, the museum focused on programs and partnerships, expanding its audience and seeking collaborative projects with faculty and students. Student and faculty groups were encouraged to use the museum for public lectures and performances, as were community groups and local embassies, establishing the museum as a center for campus life and a neighborhood resource. The museum also forged partnerships with the Historical Society of Washington, D.C., and Dumbarton Oaks. At the same time, the museum welcomed collaboration with GW academic programs, including museum studies and museum education, central Asian studies, history and the Elliott School of International Affairs’ Diaspora Research Program. In advancing GW’s academic mission, students helped design exhibitions, plan fundraising strategies, develop educational programs and conduct research through classes and internships.

Through the Eyes of Curators: The Impact of the New Museum
To Lee Talbot, the museum’s curator of Eastern Hemisphere collections, the new museum’s larger space and open and flexible floor plan have drastically changed how they can conceptualize and present exhibitions. “The larger size of the galleries enables us to include more objects and thus more fully develop exhibition themes,” he said. “Additionally, while The Textile Museum has an excellent textile-related library, our close proximity to Gelman Library’s prodigious resources has been a great help when researching for exhibitions.”

Sumru Belger Krody, the museum’s senior curator of Eastern Hemisphere collections, said the museum’s first year has been an exciting time for its staff. The staff fulfilled its commitment to the museum’s precious collections by transferring them to the collections center where they are safer and better stored than ever. “It’s thrilling that we were such a vital part of this move,” she said. “In a modern facility, our collections are much more easily available for scholars, researchers and students.”
For Jane Freundel Levey, consulting curator of the museum’s Albert H. Small Washingtoniana Collection, the past year has been occupied with breaking in the new space and working with history and American studies faculty and students to open four Washingtoniana-focused shows since last March.

The New Museum By the Numbers
Over the last several years, smaller arts organizations like The Textile Museum have partnered with—or become part of—larger institutions to ensure their sustainability and increased visibility. Bringing The Textile Museum and the Albert H. Small Washingtoniana Collection together at GW has demonstrated the viability of partnerships in creating financial sustainability, while an institution such as GW also brings resources and practices that support the mission of the museum. The educational programming of the old Textile Museum quadrupled, from about 50 activities per year to 200 in the new space. The museum has added drop-in lunchtime lectures most Mondays, Wednesdays and Thursdays, in addition to its traditional Rug and Textile Appreciation Mornings.

In the museum's first year, visitation increased by more than 50 percent (from 22,000 in The Textile Museum’s last full year of operation at S Street to more than 34,000 this past year). More than a quarter of these visitors participated in a program, tour or other educational experience.

Looking Ahead to Year Two and Beyond
In its second year, the museum will expand its focus to begin collecting contemporary textiles for the first time. The museum’s new initiative to study contemporary textiles is bolstered by a $500,000 grant from the Andrew W. Mellon Foundation to support a five-year appointment of a new curator of contemporary fiber art.

“Beyond programs and partnerships, our future priorities focus on expanding and broadening the intellectual capacity of this new museum,” said Dr. Wetenhall. “Plans are in place to double our mission-based staff by adding curators for contemporary art and textiles of the Americas, strengthening our education and conservation departments, and launching new research projects.”

Stories of Migration: Contemporary Artists Interpret Diaspora
On view from April 16 to Sept. 4, Stories of Migration: Contemporary Artists Interpret Diaspora features six invited and 38 juried textile artists who use this intimate and powerful medium to comment on migration: historic events that scattered communities across continents; today’s accounts of migrants from Syria, Africa and Latin America adapting to new homes; and personal experiences of family members. The exhibition will feature works by artists such as Faith Ringgold, William Adjété Wilson and Nancy Bardach, including large installations, fiber art and 2- to 3-D mixed media artworks. The exhibition is co-organized with Studio Art Quilt Associates and with assistance from GW’s Elliott School of International Affairs’ Diaspora Research Program.

A Collector’s Vision: Creating the Albert H. Small Washingtoniana Collection is open through winter 2017. A Collector’s Vision presents highlights from Albert H. Small’s Washingtoniana Collection, including his first acquisition and other items that explore what motivates an individual to collect. Mr. Small, a third-generation Washingtonian, first became interested in historical collecting after serving in the Navy during World War II. In 2011, Mr. Small donated his unrivaled Washingtoniana collection—nearly 60 years in the making—to GW. This collection documents the formation, development and history of D.C. from the 18th to the mid-20th century and includes 1,000 maps and prints, rare letters, photographs and drawings.

For the Record: The Art of Lily Spandorf is open through July 3. The exhibition explores the artwork of Austrian-born watercolorist and journalist Lily Spandorf (1914-2000). The exhibition is co-produced and co-curated with the Historical Society of Washington, D.C. Working with pen, ink, watercolor and gouache, Ms. Spandorf became known for the news illustrations she created for the Washington Star, the Christian Science Monitor and Washington Post, among many other periodicals. Late in her career, she became celebrated for passionately recording the transformation of Washington, D.C.’s urban landscape, especially the many red brick, late-19th century buildings facing demolition, those being demolished or buildings whose historical contexts were erased for modern construction.

The Old Patterns, New Order: Socialist Realism in Central Asia exhibition is open through May 29. For millennia, Central Asia’s turbulent history and pivotal geographic position have exposed the region’s diverse peoples to varied artistic traditions. In the 20th century, artists across this region were strongly influenced by Soviet political rule, creating images that both embraced modernity and idealized the past. Old Patterns, New Order examines the socialist realist art movement in Kyrgyzstan, Uzbekistan and other areas of Central Asia, pairing 20th-century paintings with examples of the traditional textiles they depict. This exhibition was organized in partnership with GW's Central Asia Program.

Visit the museum’s website for the latest information and details on current and upcoming exhibitions. www.museum.gwu.edu. Additional programming at the museum will be announced in the coming months.