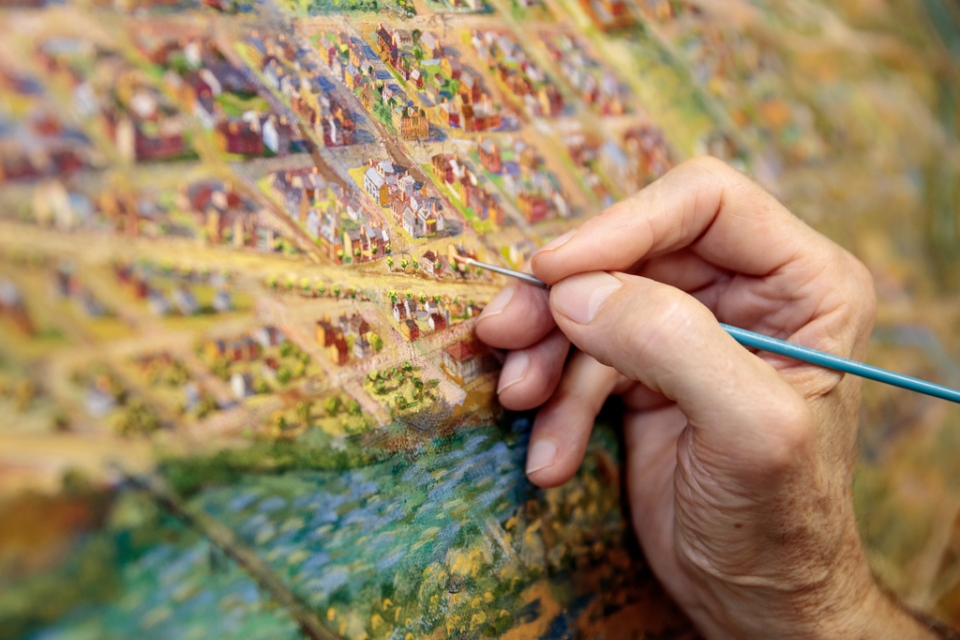 WASHINGTON (Oct. 17, 2018)—“Eye of the Bird: Visions and Views of D.C.’s Past” opened today at the George Washington University Museum and The Textile Museum. The exhibition examines the founding and early years of Washington, through two new bird’s-eye-view paintings by Peter Waddell, artist-in-residence at Tudor Place Historic House and Garden. The exhibition will be on view through Dec. 23.

Twenty-five historical prints of Washington from the museum’s Albert H. Small Washingtoniana Collection also are on display. They show how both the city and the bird’s-eye genre evolved in the 19th century. During that period, traveling artists furnished an eager public with detailed, comprehensive urban views, similar to Google Maps today.

One of Mr. Waddell’s new paintings, “The Indispensable Plan,” shows the grand capital city as planner Pierre L’Enfant envisioned it in 1791. The other, “The Village Monumental,” captures the city’s actual development by 1825, the year L’Enfant died. The exhibition also brings historical Washington to life through the stories of individuals who lived in the city in 1825, including an enslaved man working in the Navy Yard, a local businessman and the country’s first female journalist.

Mr. Waddell took nearly two years to create these panoramic artworks and conducted extensive research. He worked with Amber “Jackie” Streker, assistant curator for the museum’s Albert H. Small Center for National Capital Area Studies, to analyze historical census records, papers, diaries, letters, illustrations and other accounts to accurately locate prominent buildings in the D.C. landscape and get a feel for life in the city.

“As citizens of D.C. we are often consumed by the hustle and bustle of daily life in a large city,” Ms. Streker said. “What Peter Waddell has done is allow us to take a step back, view the nation’s capital from a different perspective and appreciate its history.”

Waddell emigrated to the United States from New Zealand in 1992 and became a U.S. citizen in 2002. He has created works for some of Washington’s major historical organizations like the White House Historical Association and U.S. Capitol. The new 6-foot paintings were commissioned by Albert H. Small and are on display for the first time.

“Eye of the Bird” was organized in collaboration with the Albert H. Small Center for National Capital Area Studies and will be accompanied by public programs, including an after-hours “Arts and Drafts” workshop and a free family day with Mr. Waddell.