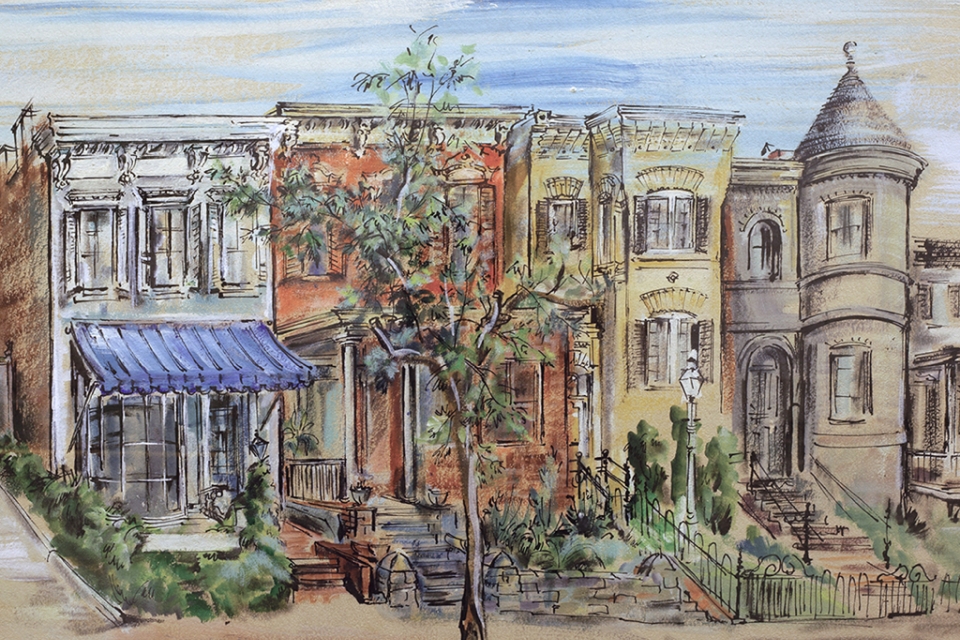 November 21, 2015
MEDIA CONTACTS:
Kurie Fitzgerald: [email protected], 202-994-6461
Maralee Csellar: [email protected], 202-994-7564
WASHINGTON (Nov. 21, 2015)—Highlighting D.C. history is important as the city continues to undergo significant cultural and architectural changes. Two exhibitions opening Saturday at the George Washington University Museum and The Textile Museum shine a light on notable events, locations and Washingtoniana artifacts. Both “A Collector’s Vision: Creating the Albert H. Small Washingtoniana Collection” and “For the Record: The Art of Lily Spandorf” help illuminate how the city evolved into the D.C. we know today.
The exhibitions will be on view through summer 2016.
“The Albert H. Small Washingtoniana Collection anchors the George Washington University Museum. The first of this fall’s exhibitions offers the public insight into how the collection came to be,” said John Wetenhall, director of the George Washington University Museum and The Textile Museum. “The second marks our first major collaboration with a valued partner, the Historical Society of Washington, D.C.”
In “A Collector’s Vision: Creating the Albert H. Small Washingtoniana Collection,” pieces from Albert H. Small’s collection, including his first acquisition, explore what motivates an individual to collect. “For the Record: The Art of Lily Spandorf,” traces the career of Ms. Spandorf and stories behind her illustrations of D.C. in the late 20th century.
Behind a Collector’s Vision
Mr. Small, a third-generation Washingtonian, first became interested in historical collecting after serving in the Navy during World War II. In 1949, he stopped at a New York City bookstore where he came across a notebook of information on “boundary stones,” the milestones that mark D.C.’s historic boundaries. His collection grew from there. In 2011, Mr. Small pledged his unrivaled Washingtoniana collection to GW. This collection documents the formation, development and history of D.C. from the late 17th to the mid-20th century and includes 1,000 maps and prints, rare letters, photographs and ephemera items.
The exhibition selects a few key objects that represent some of the strong themes of Mr. Small’s collection. It explores how Mr. Small’s desire to preserve history for future generations, his World War II experiences, childhood memories and his career as a developer motivated and shaped his collection. A highlight of the show is a wanted poster showing President Abraham Lincoln’s assassins, including John Wilkes Booth.
Fighting Tooth and Nail for Street Corners of Yesteryear
Ms. Spandorf painted scenes documenting D.C.’s move from post-World War II growth to the decay of the 1970s and early 80s. While Ms. Spandorf is best known as an artist, this exhibition looks beyond the paintings to her career as a journalist whose work appeared in The Washington Post and Washington Star, and commercial illustrator.
The Austrian-born watercolorist often sat in parks and on street corners around the city, rapidly painting buildings being torn down or their changing surroundings. She developed a passion for documenting the changing scene, and her works attracted historians and historic preservationists. The exhibition is based on watercolor paintings and documents from the Historical Society of Washington, D.C., which collaborated with the George Washington University Museum and The Textile Museum on the show.
As gentrification continues to be a divisive issue, Ms. Spandorf’s documentation of what has been lost continues to resonate. A highlight of the show is Ms. Spandorf’s illustration of the bustling municipal fish market, which continues to operate on a smaller scale today on the Southwest waterfront.
Current Exhibitions at the Museum
China: Through the Lens of John Thomson (1868–1872)
Sept. 19, 2015–Feb. 14, 2016
In the second half of the 19th century, Scottish photographer and travel writer John Thomson took four journeys across China. His photographs capture scenes and people from all walks of life—providing a lasting record of 19th-century China’s landscapes, architecture, communities and customs. This exhibition presents a stunning selection of Thomson’s photographs displayed alongside contemporaneous pieces from The Textile Museum’s collection of Qing-Dynasty textiles and accessories.
This exhibition and related programming are made possible in part through major support from the National Endowment for the Arts, the Coby Foundation and the E. Rhodes and Leona B. Carpenter Foundation.
Old Patterns, New Order: Socialist Realism in Central Asia
Oct. 10, 2015–May 29, 2016
For millennia, Central Asia’s turbulent history and pivotal geographic position have exposed the region’s diverse peoples to varied artistic traditions. In the 20th century, artists across this region were strongly influenced by Soviet political rule, creating images that both embraced modernity and idealized the past.
“Old Patterns, New Order” examines the socialist realist art movement in Kyrgyzstan, Uzbekistan, and others areas of Central Asia, pairing 20th century paintings with examples of the traditional textiles they depict. This exhibition was organized in partnership with GW's Central Asia Program.
Visit the museum’s website for the latest information and details on this fall’s exhibitions and related educational programs. www.museum.gwu.edu.
About the George Washington University Museum and The Textile Museum
The George Washington University Museum and The Textile Museum opened on March 21 on GW’s Foggy Bottom Campus. The custom-built museum displays The Textile Museum’s globally recognized collections of nearly 20,000 textiles, related objects and artworks owned by the university, including the Albert H. Small Washingtoniana Collection of 1,000 artifacts documenting the history of Washington, D.C.
-GW-