‘Your Next President . . . ! The Campaign Art of Mark and Rosalind Shenkman’ at the George Washington University Museum Highlights Evolution of Political Campaigns 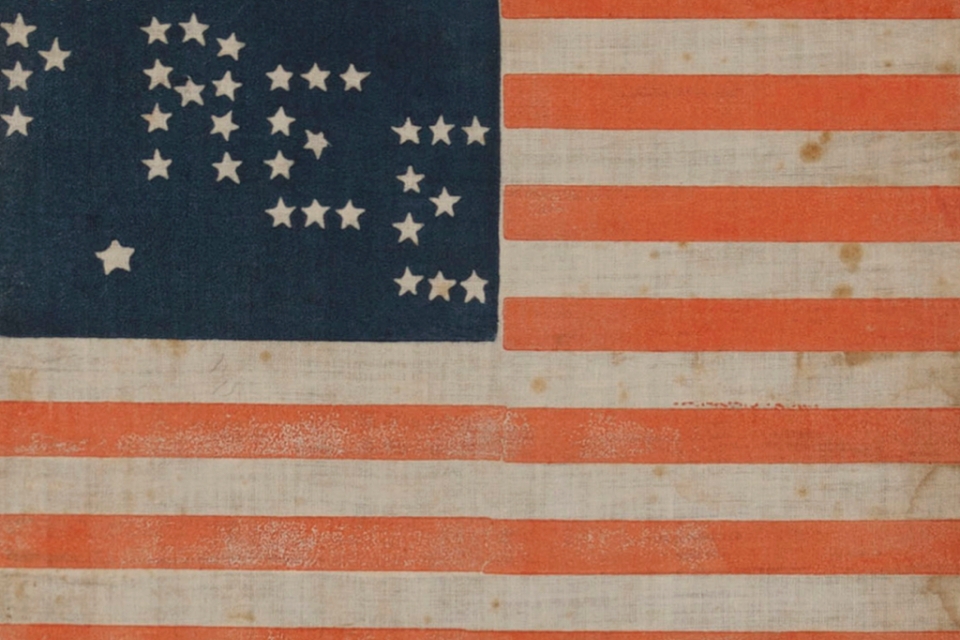 August 29, 2016
MEDIA CONTACTS:
Kurie Fitzgerald: [email protected], 202-994-6461
Brett Zongker: [email protected], 202-994-6466
WASHINGTON (Aug. 29, 2016)—As the United States prepares to elect its 45th president, the new exhibition “Your Next President . . . ! The Campaign Art of Mark and Rosalind Shenkman” at the George Washington University Museum and The Textile Museum explores the evolution of American presidential campaigning. The exhibit opens Saturday.
The exhibition features rare presidential campaign textiles produced in the 19th and early 20th centuries that were collected by former GW Trustee Mark Shenkman and his wife Rosalind. The artwork demonstrates the central role of the American flag in promoting campaigns more than a century ago. It also shows how the themes of protectionism, reform, prosperity, patriotism and immigration figured strongly in early campaigns and continue to resonate with voters today.
“It’s actually comforting to see that divisive politics are not a modern invention,” said Jane Freundel Levey, consulting curator of the museum’s Albert H. Small Washingtoniana Collection. “The Shenkman collection combines political promotion with artful designs that spoke to the mass population of Americans.”
Complementing the campaign flags are political memorabilia and period graphics from the museum’s Albert H. Small Washingtoniana Collection, the Historical Society of Washington, D.C., and the Collection of Tony Lee. Catchy political ribbons and buttons, as well as an actual torch used at political rallies of the 1870s, evoke a time of raucous electioneering.
Political Campaigns Communicating with Textiles
Campaign ads are nothing new. But without access to modern media, how did politicians in the 19th century make their positions known? Most turned to campaign flags. These imaginative interpretations of the stars and stripes conveyed character traits and issues. Noteworthy items on display include a rare flag that helped elect Abraham Lincoln in 1860 and three of the first American campaign textiles. Visitors will also see mementoes of the D.C. community’s forgotten role as funder and organizer of the quadrennial inauguration celebrations.
Like today, candidates could not always control which personal detail captured public attention. In 1888, Grover Cleveland’s snuff-dipping vice presidential candidate Allen Thurman inadvertently inspired a political trend with his signature red bandanna. These handkerchiefs came to symbolize the 1888 Democratic ticket after Thurman’s fans waved them to support him at the convention. Republicans developed competing bandannas that emphasized the stars and stripes.
A powerful Lincoln campaign flag features 35 stars arranged to spell “free,” reflecting the Republican Party’s anti-slavery stance during the Civil War. The exhibition also shows how charismatic candidates such as William Henry Harrison and Theodore Roosevelt wielded powerful personal imagery to connect with the American public.
The American Flag as an Advertisement
Today, we rarely see the American flag used as a background for advertisements, but in the 1800s printers applied commercial and political advertising directly to the stars and stripes. New York’s McEwan’s National Baking Powder was one of many companies to use this promotional medium. At the end of the 19th century, a movement arose to stop this practice and protect the flag as a sacred symbol.
Women and Early Political Campaigns
While women didn’t get the right to vote nationally until the 19th Amendment was ratified in 1920, early political campaigners assumed women had great influence, especially with the men in their lives. “Your Next President . . . !” looks at how campaigners reached women (and their voting men) with decorative home goods and children’s toys affixed with the candidate’s name or likeness. As early as the elections of 1828 and 1840, campaign organizers Martin Van Buren and Thurlow Weed directed local leaders to host teas and letter-writing parties designed to encourage women’s political participation.
“Your Next President . . . !” is open through April 10, 2017.
Current Exhibitions
“A Collector’s Vision: Creating the Albert H. Small Washingtoniana Collection” presents highlights from Albert H. Small’s Washingtoniana Collection, including his first acquisition and other items that explore what motivates an individual to collect. Mr. Small, a third-generation Washingtonian, first became interested in historical collecting after serving in the Navy during World War II. In 2011, Mr. Small donated his unrivaled Washingtoniana collection—nearly 60 years in the making—to GW. This collection documents the formation, development and history of Washington from the 18th to the mid-20th century and includes 1,000 maps and prints, rare letters, photographs and drawings.
Upcoming Exhibitions
Okinawa, Japan’s southernmost prefecture, was an independent kingdom until 1879, with its own language, art and culture. Among its most famed fabrics were those patterned with “bingata,” a uniquely Okinawan dyeing technique known for bright colors and bold patterns that evoke the lush island landscape. Organized in partnership with the Okinawa Prefectural Government, the exhibition “Bingata! Only in Okinawa,” brings to Washington masterpieces of this artistic tradition and contemporary works by Okinawan artists and designers. In conjunction with the exhibition opening, the 2016 fall symposium will feature five distinguished scholars from Okinawa who will provide a broader context for its celebrated textile art. The exhibition will be open from November 5, 2016, through January 30, 2017.
Visit the museum’s website for the latest information and details on current exhibitions. www.museum.gwu.edu. Additional programming will be announced in the coming months.
-GW-