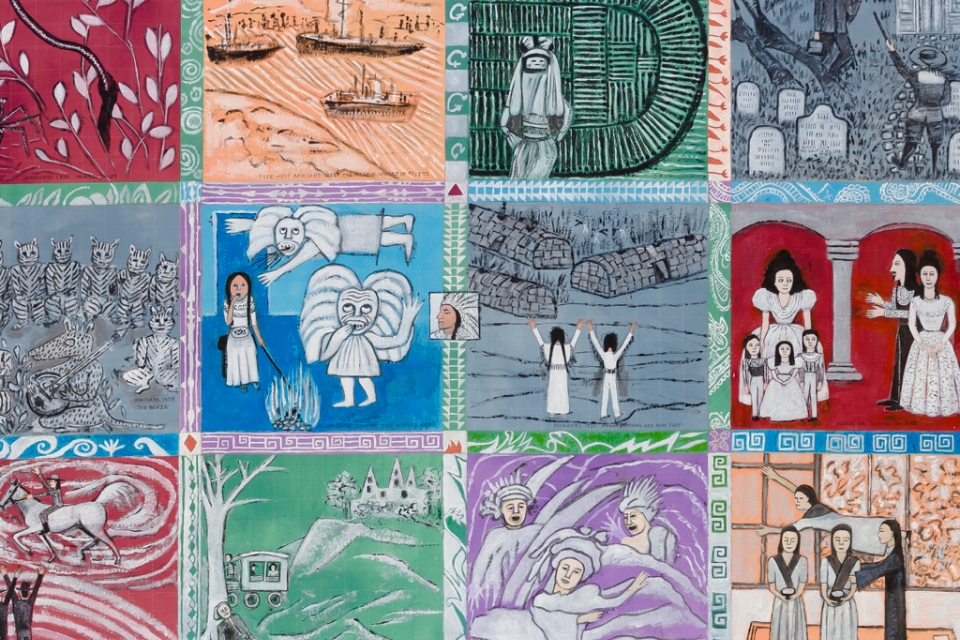 WASHINGTON (April 19, 2016)—For immigrants and migrants, the clothing on their backs and blankets wrapped around their children can tell stories of their heritage and their journey to a new home. The George Washington University Museum and The Textile Museum’s new exhibition Stories of Migration: Contemporary Artists Interpret Diaspora, opening Saturday, April 16, explores how displaced communities maintain their cultures, traditions and languages, despite distance from their homelands.

Stories of Peoples and Nations

In this juried and invitational exhibition, 44 textile artists use the medium to comment on migration: historic events that scattered communities across continents; today’s accounts of migrants from Syria, Africa and Latin America, and others adapting to new homes; and personal experiences of family members. The exhibition will feature works by artists such as fashion designer Hussein Chalayan, Mexican-American fiber-artist Consuelo Jiménez Underwood, French-Togolese artist William Adjété Wilson and American artists Faith Ringgold and Penny Mateer. Works include large installations, fiber art, and two- and three-dimensional mixed media artworks. “Stories of Migration” is on view from April 16 to Sept. 4, 2016. Co-curated by Lee Talbot and Rebecca A.T. Stevens, the exhibition is co-organized with the Studio Art Quilt Associates (SAQA) and with assistance from GW’s Diaspora Program in the Elliott School of International Affairs.

“For more than a thousand years, textiles have been used in the West to recount salient cultural narratives,” said Ms. Stevens, consulting curator for contemporary textiles at the George Washington University Museum and The Textile Museum. “The artists in this exhibition use this medium in innovative and powerful ways to bring the hardships, joys and experiences of diaspora to life.”

‘The Black Ocean’ by William Adjété Wilson – In this series of textile hangings, Mr. Wilson tells the 500-year narrative of his African lineage in a work that pays homage to his ancestors and reflects on humanity’s capacity for both nobility and depravity. The Black Ocean is composed of 18 cotton panels—patchwork, appliqué and embroidery—illustrating in chronological order the plight and resilience of the African people in the European and American diasporas from the 15th to the 21st century. Three panels will be featured in the “Stories of Migration” exhibition, along with a monitor showcasing the complete series.

‘Undocumented Travelers. Xewa Time’ by Consuelo Jiménez Underwood – Ms. Underwood’s installation is part of her “Borderlandia” series recounting her personal experience as the daughter of an undocumented migrant farm worker and a third-generation Chicana. Ms. Underwood crossed the U.S.-Mexican border many times as a child, learning firsthand of the dangers and rewards of these crossings. Her site-specific installation—which will take over an entire wall in the exhibition—confronts the cultural and ecological ramifications of the controversial border in an exuberant display of paint, barbed wire, and quilted flowers.

‘The Past as Road to Tomorrow’ by Penny Mateer – Ms. Mateer’s artwork depicts a war scene of carnage—damaged buildings, men trudging dejectedly through a damaged city, and a Muslim woman, identified by her head scarf, caring for a wounded man. The scene is a composite of images of published photographs of the ongoing destruction in the Middle East that is causing Syrians and others to leave their homeland.

"A Collector’s Vision: Creating the Albert H. Small Washingtoniana Collection" is open through winter 2017. A Collector’s Vision presents highlights from Albert H. Small’s Washingtoniana Collection, including his first acquisition and other items that explore what motivates an individual to collect. Mr. Small, is a third-generation Washingtonian, first became interested in historical collecting after serving in the Navy during World War II. In 2011, Mr. Small donated his unrivaled Washingtoniana collection—nearly 60 years in the making—to GW. This collection documents the formation, development and history of D.C. from the 18th to the mid-20th century and includes 1,000 maps and prints, rare letters, photographs and drawings.

"For the Record: The Art of Lily Spandorf" is open through July 3, 2016. The exhibition explores the artwork of Austrian-born watercolorist and journalist Lily Spandorf (1914-2000). The exhibition is co-produced and co-curated with the Historical Society of Washington, D.C.

Working with pen, ink, watercolor, and gouache, Ms. Spandorf became known for the news illustrations she created for the Washington Star, the Christian Science Monitor and Washington Post, among many other periodicals. Late in her career she became celebrated for passionately recording the transformation of Washington, D.C.’s urban landscape, especially the many red brick, late-19th century buildings facing demolition, those being demolished or buildings whose historical contexts were erased for modern construction.

"Old Patterns, New Order: Socialist Realism" in Central Asia is open through May 29, 2016. For millennia, Central Asia’s turbulent history and pivotal geographic position have exposed the region’s diverse peoples to varied artistic traditions. In the 20th century, artists across this region were strongly influenced by Soviet political rule, creating images that both embraced modernity and idealized the past.

Old Patterns, New Order examines the socialist realist art movement in Kyrgyzstan, Uzbekistan, and others areas of Central Asia, pairing 20th-century paintings with examples of the traditional textiles they depict. This exhibition was organized in partnership with GW's Central Asia Program.

Visit the museum’s website for the latest information and details on current exhibitions. www.museum.gwu.edu. Additional programming at the museum will be announced in the coming months.