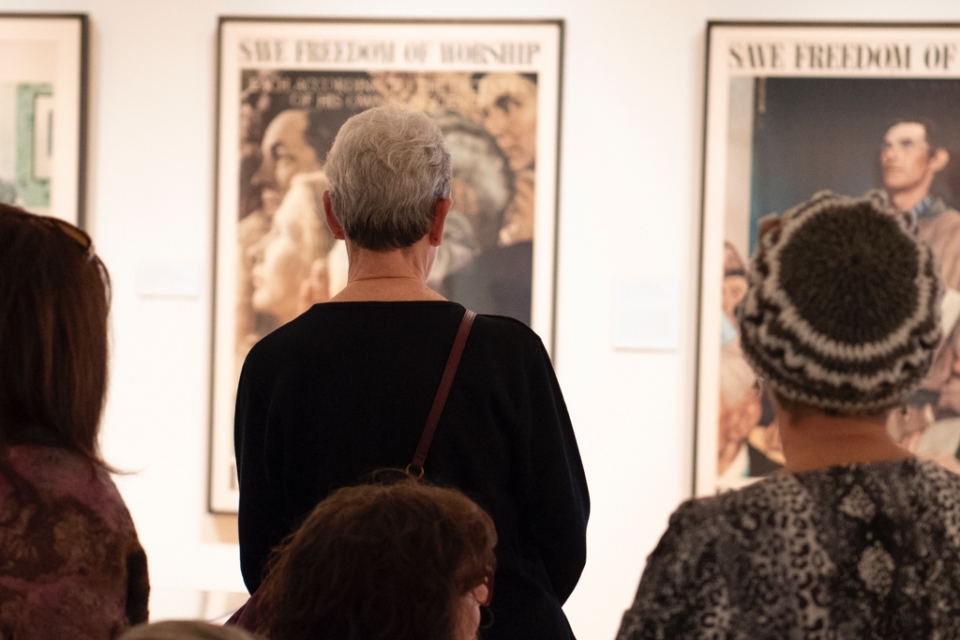 WASHINGTON (Feb. 13, 2019)— Seventy-eight years after President Franklin D. Roosevelt’s famous State of the Union address inspired artist Norman Rockwell to create his iconic “Four Freedoms” series of paintings, the works of art will be on display in the nation’s capital as part of a seven-city international tour. “Enduring Ideals: Rockwell, Roosevelt & the Four Freedoms” opened today at the George Washington University Museum and the Textile Museum and will be on view through April 29.

“Enduring Ideals” is the first comprehensive traveling exhibition devoted to Mr. Rockwell’s depictions of Mr. Roosevelt’s Four Freedoms—freedom of speech, freedom of worship, freedom from want and freedom from fear—and is a rare opportunity to see these masterpieces together outside their permanent home in Stockbridge, Massachusetts. The exhibition, organized by the Norman Rockwell Museum, takes visitors on a journey from Mr. Roosevelt’s speech to wartime paintings and posters to Mr. Rockwell’s poignant later artworks that addressed social issues such as civil rights and the Vietnam War.

The exhibition also includes works by contemporary artists offering fresh takes on freedom. Maurice “Pops” Peterson’s “Freedom from What?” depicts a modern day African American couple putting their children to bed while looking over their shoulders for possible threats from the outside world. Bri Hermanson’s “To Have and To Hold” shows two women in a loving embrace in a nod to marriage equality. Gary Bist’s painting “Refugee Families in Winter” reflects on the many refugees who risk their lives in pursuit of safety, security and freedom.

The exhibition comes to the museum through a collaboration with the Albert H. Small Center for National Capitol Area Studies, which is dedicated to research on Washington as a center of government and the values that informed its development.

“Freedom of speech and worship, freedom from fear and want are ideals as powerful today as they were for Americans who fought in World War II,” museum director John Wetenhall said. “At a time and in a federal city where the true meaning of these values has become contested in the world of partisan and identity politics, it behooves us all to reflect back to when these very freedoms were in peril – ideals so powerfully embodied in Rockwell’s unforgettable icons.”

Throughout the run of the exhibition, the museum and the university will continue to explore themes of freedom through a number of public programs. Partners include GW’s School of Media and Public Affairs, Elliott School of International Affairs, Loeb Institute for Religious Freedom, Honey W. Nash Center for Civic Engagement and Public Service, Corcoran School of the Arts and Design and Columbian College of Arts and Science.

“We are grateful for the commitment of the George Washington University to teach and celebrate the noble ideas represented in the ‘Four Freedoms’ exhibition,” Laurie Norton Moffatt, director and CEO of Norman Rockwell Museum said. The Norman Rockwell Museum organized this exhibition to commemorate the 75th anniversary of Mr. Rockwell’s four paintings. “It is our hope that Norman Rockwell’s enduring paintings will inspire a new generation of students, citizens, future leaders, and elected officials in the nation’s capital to embody these human values in their life’s work,” Ms. Moffatt said.

Lead support for the exhibition at GW was provided by the Albert H. Small Center for National Capital Area Studies, and the Mr. and Mrs. Raymond J. Horowitz Foundation for the Arts.

About the Norman Rockwell Museum
Celebrating its 50th anniversary in 2019, the Norman Rockwell Museum is dedicated to education and art appreciation inspired by the legacy of Norman Rockwell. The Museum holds the world’s largest and most significant collection of art and archival materials relating to Rockwell’s life and work, while also preserving, interpreting, and exhibiting a growing collection of art by other American illustrators throughout history. The Museum engages diverse audiences through onsite and traveling exhibitions, as well as publications, arts and humanities programs, and comprehensive online resources. www.nrm.org/